To evaluate predictors of failure of microsurgical spermatic cord denervation (MSCD) for men with chronic orchialgia.

One hundred and five men underwent MSCD, and of those, 38 were bilateral, for a total of 143 testicular units.

The men must have failed to respond to conservative therapy for at least three months, at a minimum including non-steroidal anti-inflammatory drugs (NSAIDs), heat, and scrotal elevation.

Consideration of candidacy for MSCD included that all men underwent a diagnostic spermatic cord block in the clinic and must have demonstrated at least a 50% improvement in VAS score from baseline to following the nerve block.

Between September 2011 and March 2019, 105 men met candidacy requirements and underwent MSCD for chronic orchialgia by a single fellowship-trained microsurgeon (PKK).

Summary and comments from /u/postvasectomy:

Summary of causes of pain:

Note that only 10% of men get vasectomy, the only elective situation in the above list. If 100% of men got vasectomy, presumably the PVP numbers would be 10 times higher in studies like this. So a typical composition might look more like this:

Average Visual Analog Score for pain ranged from 4.8 to 8.8

Failure rate by cause of pain:

Compare these numbers with the video from Dr. Kelli Gross, recently linked in the postvasectomypain subreddit: 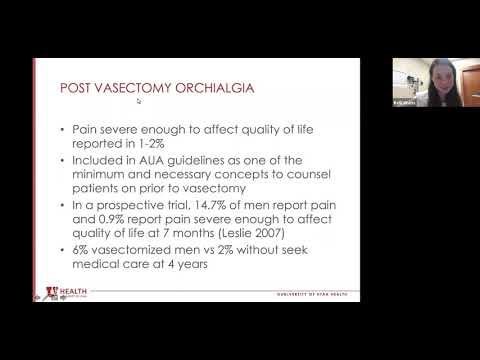 r/postvasectomypain - Dr. Kelli Gross: At four years 6% of men with...

But Dr. Gross does MSCD for all categories of men, not just PVPS guys. Because so few men get vasectomy, overall failure of MSCD was 13%, which fits in the range expressed by Dr. Gross. But if you are trying MSCD to treat PVPS, you might expect a failure rate that is twice as high – 8 failure out of 30, or 26.6%.

Great article. Thanks for sharing.

That was a good read Ethan.

Like you, I do see some shenanigans going on regarding what could be interpreted or assumed as super high success rates, when in fact, some of them men likely had partial resolution, or something along those lines. I tend to think there is a lot of that kind of stuff going on out there regarding success rates with various surgical procedures.

Some of us were already aware to some extent, but the breakdown of “cause of pain” was very helpful, although it wasn’t broke down as far as I would’ve liked to see it.

For instance, the “scrotal/inguinal” category is rather broad. “Trauma”, hard to know exactly what that means and/or consists of.

Another thing that was never mentioned was - long term follow-up. Did any of these men’s pain come back after one year or more? Did the other side start hurting at some point post denervation? Those statistics are important as well. I have definitely read or heard of men that posted stories along those lines. Hard to say, but that kind of stuff does get brought up in many articles and/or published studies, etc, that I have read regarding various methods of denervation. I’m not sure how common it is though.

Also, note that these failure rates are expressed per testicle. I’d also like to know what percent of men have pain resolve on both sides. If each side had a 73.4% chance of success, and if the outcome of each testicle is independent (which it probably isn’t) the odds of failure on at least one side would be 46%.

This number is most likely wrong, but that’s what an independent trials assumption would give. (Binomial distribution.)

That’s a pretty far cry from the rosy view that Dr. Gross holds out there, of a 0-20% failure rate. No one could say with a straight face that MSCD might have a 0% failure rate.

I think those of us in the PVPS world have had a good education on medical industry mathematics. I think most of the urologists who serve us in this group are doing their best with some really bad data. What is complete resolution? I was able to get on with my life but still depend on NSAIDs? More? No daily pain provided I don’t do some activity or expose to some sensation? One man’s partial resolution is another man’s complete resolution. Same goes for the 0-10 pain scale. To me, a 10 requires me to go to the ER. And, we all know a seemingly lite 3/10 for many months can still be agonizing.

That all said, I do think some doctors are prone to exaggerate their own treatments benefits. It’s a bias inherent to humans. Hell, I think any company that doesn’t use my firm’s consultative service is foolish because I drank my firm’s Kool Aid.

Look at how badly the Covid-19 data has been distorted and politicized to fit the reporting entities’ narrative. Same thing with PVPS.

This study appears to be one of the best done to date.

Surgeons use the term testicular unit. Makes it less human I suppose? Thanks for your outstanding research and comments!

Getiing surgrey on both sides December 8th wish me luck friends!!! Maybe I’ll start a blog I’m desperate for relief. Almost 3 years post vascatomy. Since I got the snip things have never been the same. I feel for everyone hurting. I’m scared but I can’t even talk myself out of doing denervation. I’ve tried all conservative treatments!!!

Good luck. Here’s a tweet from Dr. Shoskes a few minutes ago:

As best as I can recall, no prior study of spermatic cord denervation has found that post vasectomy pain negatively impacted chance of success (including our own data)

Almost three years post vasectomy, so was your vasectomy Jan 2018?

Ethan guess who’s doing my surgrey in Cleveland. You named it Dr. Shoskes:)

Just had bilateral denervation with Dr. P. if you want to chat. My recommendation, rest, rest and more rest. He recommends 7 days bed rest. I did 10 days and honestly felt like two weeks would have been even better. Don’t panic if things feel worse at first. I’m still in the healing phase so I cannot speak to the overall success for me, but I feel like I’m trending better. I will post more in several months once I have fully recovered. Good luck!

Oh no he said I could be back to work in 2 to 5 days. Ouch I have seen other doctors or websites saying 2 weeks off

I’ve seen both Dr. Shoskes and Dr. Parekatill several times. I’d be comfortable having SCD with either of them. Dr. Shoskes, as I’m sure you’ve figured out, is a bit more introverted and not as warm or gregarious as Dr. Parekatill. For some, that’s a turnoff, but I do want to say my sense is that he’s very competent and will do a good job for you. Thankfully, I never had to choose between them as the cord injections finally put my pain at bay, but it took a long time.

Are you a fellow Clevelander?

Yes Dr. Shoskes was quiet straight to the point. I liked that personally. It’s better then a doctor saying its in your head.

Dr. P’s instructions say 7 days bed rest. That is what I would recommend as well, some probably can get by with less, some need more like me.

Dear all,
some additional data and papers to review. Attaching as PDFs.
Hope this helps.

I actually had my spermatic cord denervation done on both sides by one of the authors of the study, Dr. Kavoussi. Previous to this I had an epididymectomy on the right side in Dec 2019. That was the worst surgical procedure I have gone through. My right testicle was hard as a rock for 4 months. It also hurt but different than the epididymis pain. The left side epididymis still had pain. Because of that outcome I decided that I probably couldn’t undergo the same surgery on the left side. I began searching for a doctor that did spermatic cord denervation. I found several studies published by Dr. Kavoussi, and found out he was relatively close to me. I live in Fort Worth and he is in Austin. Luckily my Sister in law lives in Austin so I could stay there a couple of days to ice it. I had the left side done in June. When I got home I had zero testicle pain and figure it was still numb from the local, but when he called a couple of hours later he said the local was gone hours ago. I did have some bruising an swelling because he also repaired a varicocele while stripping the nerve. It worked so well on the left sine that I did the right in August to get rid of the random pains in my right testicle. No swelling or bruising on the right side. Overall, probably 99% on the left and 100 on the right. I have been to enough doctors to differentiate between one that excels at what they do vs being OK. Dr. Kavoussi excels at what he does. FYI his practice is a fertility clinic, which I thought was kinda weird, but my urologist explained that all of the reversals and repairs are done under a microscope so they are the best ones to do denervation as well. I am posting this in the hope it will help someone dealing with unexplained pain. If I had known this was a viable option I would have never chosen to have the epididymectomy. As far as cost, my insurance covered the left side because of the varicocele, the right side was out of pocket and totaled 3400. I would have paid 3 times that to fix it. If anyone has any questions feel free to contact me.

Was it a targeted denervation? I did both sides separately and it was just a small incision on each side of my groin. Only did ice and rest for 2 days. 6 months later about 99 % on the left and 100% on the right.

Does it alter your feeling much I mean at ejaculation. Normal feelings are they still there.